RESURRECTION OF THE GOLDEN CALF 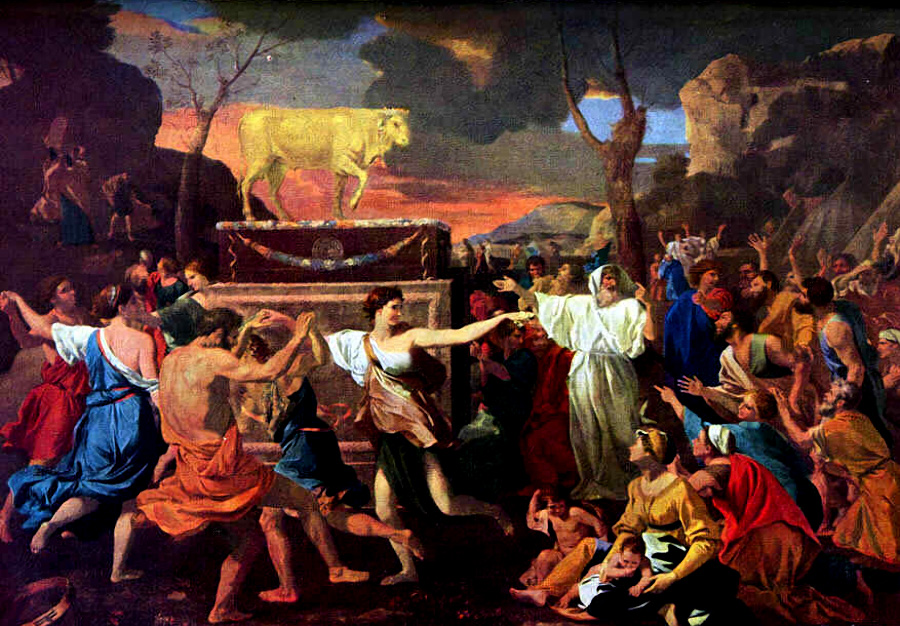 The Apostle Paul, by the Holy Spirit, signified that in the last days some would depart from the faith, giving heed to seducing spirits and demonic doctrines. We are watching this happen before our very eyes. Without question, this prophecy in First Timothy also affects church leaders. The questions we should ask are, “What happens when the one departing from the faith is a minister or church leader? How many will follow their lead? Why are they following them?” We have an early example of the destructiveness and perverting power of this very phenomenon in the book of Exodus.

We are all familiar with the story of the golden calf. However, closer study of this event can shed some light on the plots currently unraveling the fabric of the Church. The demise of any organization begins with leadership. We will observe from this story conditions, which can result in modern day ministers misleading the people as Aaron did.

First of all, we see the people readily became bored when Moses delayed in coming down from the mount.  As they sat in God’s midst at the base of the mountain, which was on fire, smoking, and quaking from His glory, they still managed to somehow get bored with His presence. Despite all the signs and wonders and miraculous demonstrations of provision they had seen, it took less than 40 days of sitting still to bore them with Jehovah God.

Secondly, we see they gathered themselves to Aaron, the number two man. They lacked loyalty to the God-ordained leader.  However, Moses had left Aaron AND Hur in charge (Exodus 24:14). Hur is nowhere to be found in the narrative and so it must be assumed he had nothing to do with this falling away. But why didn’t they approach Hur? What in Aaron drew them to him? Ministers should ask themselves the following similar question. “What is it about me that keeps drawing loose, lukewarm Christians to me and my ministry?”

In this story, a certain portion of the children of Israel were interested in committing apostasy. They wanted someone to lead them and they saw the needed qualities in Aaron. This is still happening today. Some Christians are looking to commit apostasy and they are looking for leaders who will lead in that direction. Aaron submitted to their request for leadership just as many of our modern leaders are submitting to the cry for an apostate leader.

These apostates found the leader they wanted in Aaron. He complied with them, even taking charge by requesting their golden earrings, and they obeyed. Here was a man they could follow because they agreed with his vision. But notice where the gold came from: their ears. Aaron did not request golden necklaces, not golden bracelets, not golden rings but golden earrings.  Why? Look at this prophecy in Second Timothy:

Aaron took their golden earrings because he had to tickle the itching ear to retrieve the golden earring. These Exodus apostates could not endure the sound doctrine of Jehovah Elohim, so their “itching ears” found a teacher who would tickle their itch and give them what they wanted—an easier, more comfortable, more user-friendly way to serve.

Aaron requested the golden earrings from every man, woman, boy, and girl. He wanted everyone’s input before he fashioned this new version of Elohim.  He wanted to make sure everyone had a say in this new Elohim; this way no one could be offended at his final creation.

Modern Aarons run their ministries the same way. They poll the people to see what they like and dislike. Modern Aarons tailor their message for the itching ears. They are careful not to offend. If preaching against adultery offends, no problem, they won’t preach against adultery. If requiring a high standard is too hard on you, no problem, they will lower the standard for you.

Aaron fashioned the calf out of gold, but what he declared the calf to be reveals the true nature of the problem. In Exodus 32:4, he declared, “These be your gods (Elohim).” Aaron presented to them multiple gods. He presented to the apostates one golden calf, but he called it “gods”, plural. I believe he realized he had to create a polytheistic god in order to please everybody who had contributed. The golden calf was to each apostate whatever they wanted it to be. To the sexual deviant, the golden calf was an Elohim who permitted sexual deviance. To the adulterer, the golden calf was an Elohim who permitted adultery.

The Living Bible adds he “….saw how happy the people were about it.” The people were not excited about the true and living God manifested on the mountain, but they were excited about this newly fabricated god in whose creation they had taken part. They would not venture up to the top of the mountain at the sound of the trumpet, but they would proffer forth gold if they could have a say in the new god. Aaron audaciously proclaims the idol to be Jehovah. This golden calf has now been called by both names of the one true and living God, Jehovah Elohim. Likewise, we are witnessing every manner of sin and filth and unscrupulous device being called Jesus Christ and the move of God. Things haven’t changed. This vile spirit is still at work in the earth.

Notice how this “new” Jehovah excited the people when the real Jehovah couldn’t. These apostates had witnessed God’s power through the water standing on heaps, bitter waters made sweet, and a river coming forth from a rock. Since they had seen the mighty hand of God time and time again, we must ask the question, “ How could they not be excited to worship and obey God, but be so excited about this golden calf falsely called Jehovah Elohim?  How?” The answer is easy.

The golden calf was the reproduction of a god they were exposed to while enslaved in Egypt for four hundred thirty years. The golden calf was an image of the Egyptian god, Apis. After four hundred years in Egypt, Israel would have been overly familiar with Apis. The Egyptians were polytheistic. They worshipped Anubis, Osiris, Isis, their Pharaohs, and the god Apis.  He was the only Egyptian god who was entirely animal. Apis was an actual living bull.

The Egyptians believed Apis was conceived by a ray of light from heaven. He was called “the renewal of life.” The qualities the Egyptians attributed to Apis were: courage, great strength, virility, a fighting spirit, healing, and kindness and mercy toward strangers. These are the very qualities they had just experienced by the hand of the true Jehovah Elohim as He delivered them from Egypt. He had fought for them. He had healed them. He had given them strength and courage. He had been merciful and kind to them as they were strangers in a foreign land.  Apis had all the qualities of Jehovah but none of the truth or saving power. Apis was what they had always known and done. To Israel, Apis was comfortable and familiar. Apis represents the world’s idolatry and lust. Israel had departed from Egypt, but Egypt had not departed from Israel. Aaron was able to excite Israel by catering to the Apis that was still in them. Many pastors are catering to the Apis that is still in their believers. To cater to the spirit of Apis is to allow him to direct your church and your services.

Israel was excited about the golden calf because it was familiar and comfortable. Moses was trying to introduce them to the Living God but that was uncomfortable, unfamiliar, and it did not go over well. He was not successful in getting Israel excited about the real God. Aaron, however, was successful in getting Israel excited. Modern Aarons have discovered their predecessor’s secret to arousing the people: get everyone’s input, make them comfortable, lower the standard, back off the truth, and cater to carnality.

It would appear this great falling away is nothing more than old-fashioned pagan idolatry.