Engrafted Word Church was birthed in June 1983 (formerly known as Cookeville Christian Fellowship) by the late Dr. Kenneth James Vaughn.  Pastor Vaughn began his ministry as a Baptist pastor, but was soon called to attend Rhema Bible Training Center in Broken Arrow, Oklahoma.  Our church first met in the back room of Cornerstone Christian Bookstore at 3 West Broad Street until the Spring of 1984 when we began meeting in the building next door at 5 West Broad Street. The ministry continued to grow, and in June 1988, we were able to expand to include the building at 9 West Broad Street.  In 2013 we purchased the entire corner block.

Pastor Vaughn passed into eternity in 2007 at which point Chris McMichael and his wife, Manda, were set in as pastors.  For over 30 years our church has emphasized the teaching and preaching of the Bible, discipling the saints, training up future fivefold ministry gifts, local evangelism, world missions, and pioneering and preaching the full gospel in our region. 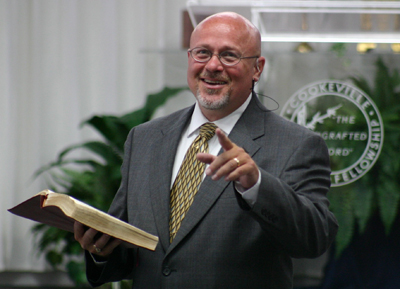