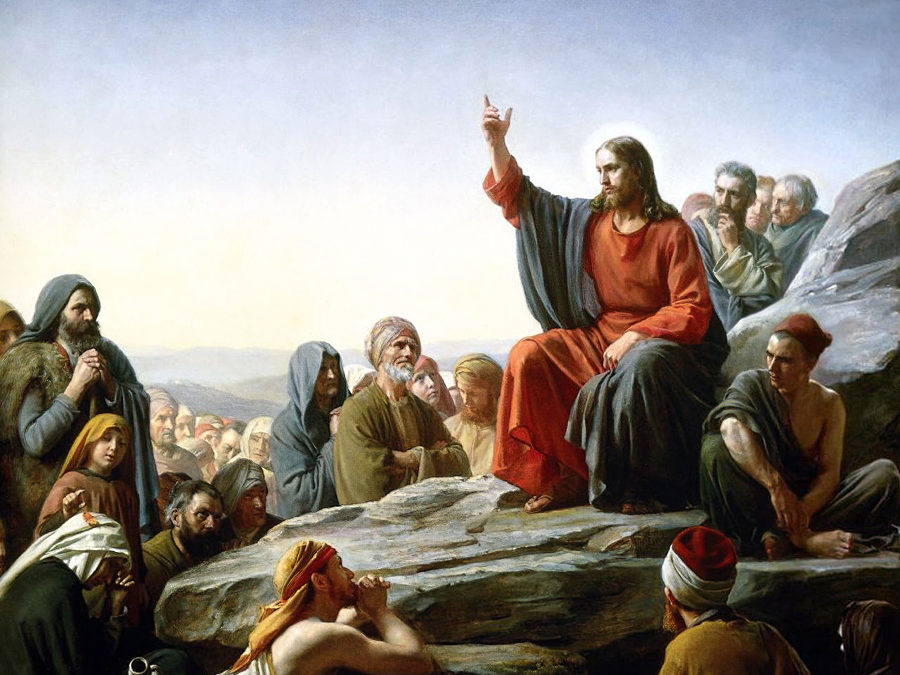 As we walk through these last days, it’s not hard to see that the Church is growing increasingly secular every day.  In our attempt to reach the lost and impact society, we have increasingly left the scriptures in search of man’s wisdom and recommendations for building the Church.  All one has to do is look at the three main metrics by which most American churches judge their own success to realize how secular we have become.  These three metrics are so worldly, it’s rather shameful that they are accepted as worthy indicators of a church’s health.  These three metrics are: buildings, bucks, and bodies.  Many churches (even little ones) judge their success in Christ (and, as a result the pastor’s self-worth) on the number of people in attendance, the amount of money in the bank, and the size of the buildings being built.

While all three are great (and may God increase all three for the Kingdom), they are not biblical metrics by which we can declare a minister or a ministry a success or a failure. After all, Jesus Christ labored for three and a half years and started His church in an upper room, not a stadium, with no money and only 120 disciples.   If these three metrics were a true indicator of God’s hand and a pastor’s success, then every secular rock concert should be labeled an all out revival.  Though there is much to be said about money and buildings, I will only focus on the subject of attendance in this article.  The aim of this article is to address the differences between multitudes and disciples in our local churches, to encourage the “little guy” (though the little guy is often far more powerful and holy than the mega-star preacher), and to disenchant the mega-churches into a sobering call to reality, repentance if necessary, and discipleship.

One of the problems with using congregation size as a metric of success is that, biblically, the multitudes have always been fickle.  Beginning with John the Baptist, multitudes were always interested in what God was doing.  All of Israel went out to be baptized by him as he prepared the way for Jesus.  Even the Pharisees came out in great numbers to watch the wild prophet preach his confrontational message of repentance.  But then John’s numbers began to dwindle.  Jesus drew the multitudes away from John and they followed Him everywhere He went.  Perhaps they left John to follow the newest rabbi on the scene or, perhaps, they left out of a sincere hunger; but nevertheless, John decreased that Jesus might increase.  These multitudes came to Jesus to hear, be healed, and to be fed a free meal. The multitudes grew as the people came to have a need supplied, but how many of them stuck around to help build God’s Kingdom after they got their touch from God?  For over three years, Jesus had the largest crowds until the messages became too hard or something more than sitting and listening was required of them.  Thus, even the Lord’s numbers began to dwindle.  How fickle.

Who else in the Bible could draw a multitude?  Well, Judas was sent with a “band” of men to arrest Jesus.  The Greek indicates that this “band” was anywhere from 500 to 1000 men.  Matthew’s Gospel confirms this great number, “And while he yet spake, lo, Judas, one of the twelve, came, and with him a great multitude with swords and staves,” (Matthew 26:47).  I guess Christ-betrayers don’t have a problem drawing a crowd.  Who else could draw a crowd during the ministry of Jesus Christ?

It was a “whole multitude” that led Jesus unto Pilate (Luke 23:1). This multitude insisted that Jesus was guilty and that Pilate must punish Him.  Barabbas also had a multitude pulling for him.  Though this crowd was “persuaded” by the chief priests and elders, they still chose Barabbas (son of the father) over Jesus Christ, the only Son of the Father.  I wonder how many in the multitude that day, cheering for Barabbas, had been healed by Jesus, had their dead restored to them, or ate of a multiplied fish and loaf.  This is the same multitude that cried, “Crucify him!”  It may be that once they had received what they wanted out of Jesus, they no longer had need of Him.  What a fickle multitude.  But we must also ask, “Where was the multitude as Jesus carried His cross? Where was the mega-congregation at Calvary?”  Alas, nowhere.  The pro-Jesus multitude had abandoned Him.  The party was over.  The newness had worn off.  Only John the beloved followed Jesus unto His death—he and a handful of women.  And where was the multitude that waived palm branches just a few days earlier?

To further prove how unfaithful and fickle the multitudes can be, consider the disciple’s qualifications for replacing Judas, the traitor.  A season of prayer in the upper room revealed only two qualifications were necessary to become the twelfth Apostle of the Lamb: 1) Judas’ replacement had to have been with Jesus from His baptism by John, and 2) had remained with Jesus until His ascension into heaven (Acts 1:21-23).  The two qualifications amounted to basically three and a half years of faithfulness.  And how many in this small group of 120 disciples met these two qualifications? Only two—Justus and Matthias.  Only two!!  Out the great multitude at the River Jordan who heard John declare, “Behold the Lamb of God, which taketh away the sin of the world,” (John 1:29) only two believed and said, “I will follow Him until the end”—Justus and Matthias.  Matthias became Judas’ replacement and the Church began with 120 faithful disciples a few days later.

Real church growth is a measure of the growth of the individual believer.  Which do you suppose is the stronger church: the church with 5,000 carnal spectators, or the church with 50 discipled members?  It is evident from the Gospels that God sees a difference between disciples and multitudes.  Consider the following verses:

It is clear that God makes a distinction between those who flock to Jesus in a multitude and those who are actually His disciples.  Even in small churches not everyone is a disciple.

In studying the Gospels closely, you can see tremendous similarities between the multitudes following Jesus in His day and the multitudes following Jesus today.  The multitudes will be astonished at good doctrine (Matthew 22:33).  They don’t necessarily want to live good doctrine, they’re just in awe at how profound it is.  The multitudes don’t really mind being taught (Mark 2:13, 4:1, 6:34); problems only arise when you try to get them to act on what they’ve heard.  The multitudes also require simple messages.  You’ll never be able to really give them heavy meat or deep teachings; Jesus was never able to.  Jesus taught the multitudes with parables and then expounded the deeper truths in private to His disciples (Matthew 10:13-17; Mark 4:2).  In America today, a general rule of thumb seems to be “the bigger the church, the weaker the message.”  I don’t believe it has to be this way, but multitude-based churches just seem to default to this pattern.  A pastor of one of the biggest churches in America recently expressed his explanation for why small churches remain small by saying in effect, “I think emphasizing doctrine will keep a church small.”  Needless to say, he is known for his mega-multitudes and not for his doctrine. (Never mind that Paul spoke of doctrine 15 times in the three pastoral epistles alone.)

Jesus looked over the multitude as He ministered to them and had compassion toward them because “they were like sheep having no shepherd.”  Might that describe the modern church multitudes, sheep having no shepherd?  The multitudes often come to see what they can get, but not give.  They love to hear the sermon and have hands laid on them (Luke 5:15), but they won’t stick around to help clean up the nursery.

Even the revivals of the early Church (where the day of Pentecost saw 3,000 get saved, and then 5,000 more a short time later) were not immune to this multitude syndrome.  With the early Church membership at 8,000+ believers, the Church should have been unstoppable.  But, alas, 8,000 believers do not equal 8,000 disciples.  When Herod took James and beheaded him, the Church did nothing.  But when he arrested Peter, the Church began to pray.  Upon Peter’s supernatural release from prison, he made his way to the prayer meeting where the faithful were still praying at the house of John Mark’s mother.  A house might hold a few hundred at best, but it won’t hold 8,000 members.  Where were the rest of the believers?  Of the 8,000 converts to Christ, only a few hundred were faithful to

attend the prayer meeting on behalf of their apostle.  Remember, these 8,000 were Peter’s converts.  They came to Christ after hearing Peter preach.  Where were they when he needed their help?  Where was the fickle multitude?

When we study the Gospels, we can see quite readily that a bulk of any multitude will never become a disciple of Jesus Christ.  Discipleship is simply too hard and it takes too much work and sacrifice.  Remember, wide is the path that leads to destruction and many be they that enter therein, but narrow is the way that leads to eternal life and few be they that enter therein (Matthew 7:13) Throughout the Gospels, Jesus taught nine requirements to being one of His disciples.  For many of the following requirements Jesus would state, “You cannot be my disciple unless you . . .”

In those churches of thousands, do you really believe everyone there is a disciple of Jesus Christ, capable of reproducing Christ in another believer?  Of course not, but what is being done to give those lukewarm peripheral members the opportunity and instruction to become a disciple?  What percentage of your church membership do you truly believe are disciples? Fifty percent? Twenty percent?  Ten percent?  It is impossible to make disciples catering to the “seekers.”  What will you do to make disciples out of those that are faithful to attend?  As a pastor, I’d rather lead 20 disciples to heaven than follow the whims of 5,000 seekers to hell.  Let us not be impressed by the masses nor be disheartened by the empty seats.  Rather, let us be faithful to preach the Gospel.  It’s the Lord’s job to build the Church, not the preacher’s.  We just preach the Gospel—He builds His Church.  You can’t build a ministry on the multitudes, so why build one trying to cater to them? Above all, don’t be deceived by church size, after all, this modern church growth revival may be nothing more than Christians comfortably falling away from Jesus Christ and landing in local goat pens and tare garners, replete with all the latest trendy entertainment comforts and accessories.